Today, after upgrading to Splunk 6.1 I realized, that some GeoIP data in dashboards was missing. By using the lookup search command to get the country from an IP address like :

I got an error message, which showed that the lookup was somehow not working.

As the “geoip” lookup is implemented as a python script I checked the process using procmon..

To fix the issue open the lookup script, uncomment line 5 and comment out line 6:

The same issue also applies to the Splunk Google Maps app. The command

returns error code 1 instead of a pin on the map. 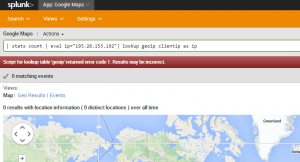 you have to adjust the config file c:\Program Files\Splunk\etc\apps\maps\default\geoip.conf to

The whole issue looks like a compatibility issue from Splunk 6.0 to 6.1. It seems that lookup scripts are executed in a different working directory.